I had some basic goals in life that I set somewhere in middle school: join the military, get married, and have a bunch of kids. And things went along in that order. I would be hard pressed to specify exactly what a ‘bunch’ is, but without a doubt God has blessed the wife and I with six children. He made me sweat it out in the beginning with the first being girls, but then came along with three sons. Saturday morning, in true fashion, a toddler walked into the room with a poopy diaper walked in with no concept of volume control. Started the process of changing diapers and feeding kids. Wife came downstairs and had the children give me their cards and the gifts. You can’t tell from the picture but it’s a tie that looks like a electronic circuit board, and then a yellow polo shirt with the Star Trek communicator sewn on. 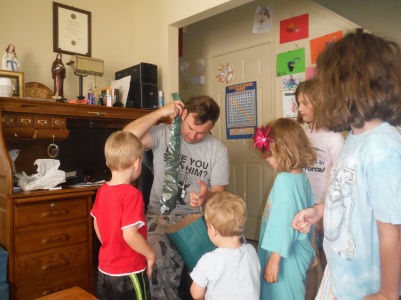 Friday night I gave the children a list of choices, my heart slightly broken when they laughed at the suggestion of going to a puppet play of the Wizard of Oz, something I would have been excited by when I was a child. Several of the choices came from a blog called Kid Friendly DC which does a good job of not only letting you know what’s out there, but what is happening that particular weekend/week. The kids selected going to Spout’s, a television channel for toddlers if you have never heard of it, promotion of it’s new show AstroBlast. They’re doing a nationwide tour of putting on a “space camp”, which involves kid bungee jumping, playing with moon sand, tunnels and climbing towers, and a moon bounce. We got there about ten minutes after they started and on par for the area it was already crowded. The older girls were adamant about being in line for the bungee jumping whereas Bubbles and Duke went straight to the moon sand, while the wife let Pooh run around.

Easily, Bubbles enjoyed the bungee jumping the most, followed by Pippi; both tried back-flips but just couldn’t time it right. Gem did okay, and you could tell Duke didn’t know what to think and had a blank expression on his face. 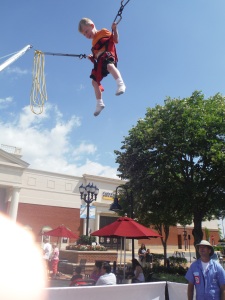 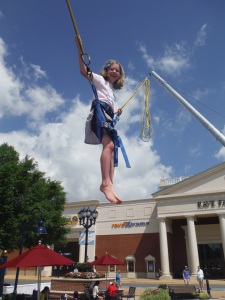 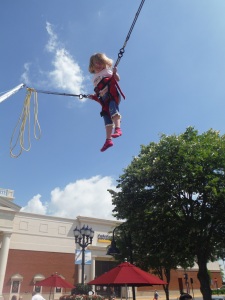 Without a doubt, Gem is little momma, and likes to play with the baby or Pooh. From the pictures it would appear Duke and Pooh are best buddies, but usually they’re fighting up a storm. Kermit drinking his bottle, he spent most of the time people watching.

The kids had fun playing and they reached a point where they had their fill. There was restaurants within walking distance and we chose California Pizza, which was quite good. Afterwards, the kids and I rode the kiddie train circling the plaza, and then they played in the splash pad area. We stopped by a place we saw earlier and got frozen yogurt.

We got home mid-afternoon and I took the four of the children with me to the store. Pippi and Gem had gotten gift cards and wanted to get things. I was able to drop off some shirts to the dry cleaners, and got Gem the new sneakers she desperately needed (they were an amazing $3.67, shoes on the clearance rack that were last of their line). We went to the 1700 Mass, and unfortunately the visiting Priest wasn’t able to make it, so we had a Communion Service in it’s stead. A frank reminder that we need our spiritual fathers, and if we are to have a future, as the people of the way, vocations start at home.

(The editing for this page is alittle goofy when it comes to pictures. I was going to wade into the auto-generated code but simply don’t have time to monkey with it.)

View all posts by AroostookGeorge