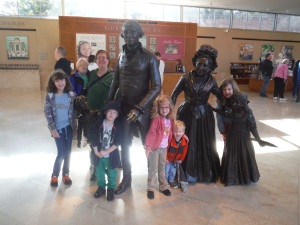 Recently we spent the day at Mount Vernon. The home of our first President, George Washington. We were happy to be able to attend a special Homeschool Day. The first thing we did was make our way to the mansion. As we got there not long after opening we had one of the first times to enter the mansion. The kids were very excited to see where George Washington lived. Being he was the first and stands out as a great role model the older knew exactly who he was. History is my thing really so we hadn’t gotten to that with Bubbles and Duke. They seemed to enjoy it just the same. The house really as big as it looks from the outside. Walking through part of the past was pretty kewl. We also had the opportunity to touch a part of the past as well. The banister leading to the guests rooms is just a small but kewl thing to say you have touched.There were lots of other things to enjoy like story time, a walk around the grounds, and Corn darts. The kids had a blast getting to see a small part of what still exists of George Washington’s once 8,000 acres. I would have to say one of my favorite things was hearing the Fife player. He played all the service songs very well. So great to hear the Air Force song. Remembering my 2 yrs Active Duty Air Force and now an Air Force Wife. I wouldn’t change it for anything. It really has made me appreciate the great opportunities that we have that much more.

OK, so now you are wondering where the Mattresses come in. My husband ordered new mattresses for Pooh and Duke and they arrived the same day. It isn’t normally seen as a big deal but they made it so. They had somewhat of a party on the front lawn. Mattress fighting, popping of the packing bags and hiding in the boxes. You would have thought someone was playing with pop guns it was so loud. It really was a fun and interesting to end our day. The adventures are always more fun with 6!