Believe it or not Animal Kingdom was the park I was most looking forward to. The morning started out great we got continental breakfast at the Royale Parc Suites where we were staying. No complaints from the kiddos there. The other great thing about the hotel was that not far from our door was a small playground, arcade and an entrance to the pool. Yes, we were on the first floor. It just makes it easier to carry all the stuff and kids. So before we left I handed out the cute hats I bought for the younger four. Two Lightining McQueen, One Lightining McQueen and Mater, and a Sophia the First. I had found them pretty cheap at the Base Exchange before leaving for our trip. So anyways, we are in the car almost to the park and I realize I don’t have my phone. In the excitement of the hats I put my phone down and forgot. I felt pretty dumb but we went back to the room I grabbed it and we were back on our way.

The first thing we scheduled for Fast Pass was Finding Nemo-The Musical. But because we were meeting the cousins we decided to explore the area before meeting up with them. We took our chances riding the Tricera Top Spin. We all rode it the first time. Baby Kermit didn’t seem to enjoy it so we watched the others ride instead the second time. The we headed over to where the Nemo-Musical was to wait for George’s sister and her family. Once they arrived we headed in to find our seats. Between our two families there are 10 kiddos. The Nemo Musical was pretty kewl and weird at the same time. I say this because The puppets look kewl but you can still watch and see the people. It was really hard not to watch the people. Really, really hard. Pooh absolutely loved it. He couldn’t get enough. He laughed alot.

After that we headed over to the meet and greet line for Pocahontas. It was the longest we had to wait for a character but at least the kids got a chance to talk and play with their cousins.Governor Ratcliff was there to greet us first. I told him to go home. No seriously I told him to go home. A little girl in front of us cried at the sight of him. Kids aren’t dumb. He’s the bad guy. Pocahontas was very sweet. Bubbles and Duke enjoyed talking to her. The funniest thing besides Jem making a face during our picture was that Pocahontas said we must have had to travel in a long canoe.

Anyways after the long wait the kids were pretty cranky so we decided to feed ours before our next FastPass experience. We ate at the  Flame Tree Barbecue. The good was really good. The kids either had an Uncrustable sandwich or a chicken drumstick with grapes. I had 1/2 a chicken with baked beans and cornbread. After lunch we headed over to Kilimanjaro Safari’s ride. It was nice to sit in the shade and be able to enjoy the ride. This was one of those rides that was very educational as well as some humor tied in. The girls really enjoyed this ride seeing as how they sat in the front and asked lots of questions. After the ride we were hot and in need of a snack. We quickly found an ice cream stand. Mickey mouse ice creams for everyone. At this point the 2 little boys decided to take a nap. While they napped George took Jem and Duke on the Kali River Rapids while I took the little boys, Pippi and Bubbles for a walk on the Maharajah Jungle Trek. This was a great compromise as the 2 little ones could not go on the Rapids ride.

Once each set had taken their turn we started walking back towards the front gates. By chance we had the opportunity to get our picture taken with Mickey and Minnie. Boy, were the kids excited. Well, a few of them were. Pooh and Baby Kermit seem to love Mickey more than their siblings. It was one of those opportunities I was happy the kids had. We continued our walk toward the front gate and noticed that there was a short wait for the Tough to Be a Bug show. We went in not sure what we were getting ourselves into. The show was really well done and I know the kids remember it. ***Spoiler*** Spiders come down from the ceiling. My kids along with my husband are not fans of spiders at all. It was funny watching them all. Before leaving we decided to stop at one of the photo stations to figure out how that worked. I’m glad we did because we had were one of the few ppl that had a chat Tarzan. The kids talked to him and I did my best to get him to beat his chest and yell. Instead he wanted me to do it and I felt like a complete idiot but again I think the kids got a kick out of it.

We went back to the room get everybody ready and jumped into the pool. Sadly though the pool was not much cooler than it was outside. THe kids love the water so it was hard as usual to get them out. That night for dinner we enjoyed Chinese leftovers from the night before. It really was good Chinese. If you haven’t figured out already we just can’t seem to find any good restaurants near us. We decided to give the kids a Disney themed gift that we had bought a couple weeks before. Pooh and Baby Kermit got a Cars rug with 2 cars to play with, Duke and Bubbles each got a drawing book of Cars or Sophia the First. Pippi and Jem eat got a Stationary kit of Rapunzel or multiple princesses.  Another long day that ended with alot of tired little people. 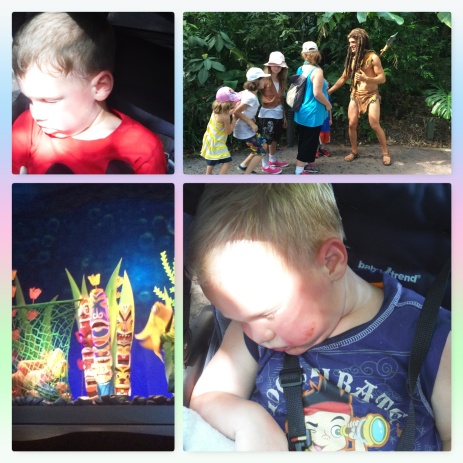