The last day of our Disney visit we decided to head down to Downtown Disney. George’s sister and husband gave the kids gifts card and boy were the kids itching to spend them. There was alot of construction going on. It made maneuvering the parking lots a little tricky. It was kinda fun walking down the streets and seeing the themed shops. We stopped into a few. The one I had to push everyone out of was Disney’s Candy Cauldron. The treats looked so yummy but were very expensive. Even George who is a candy lover didn’t have any intention of buying anything. We hit the jack pot when we found the Lego and Disney Stores. The kids had no problem finding something to spend their money on. The kewl thing about the Lego store are the great sculptures all around inside and outside the store. Baby Kermit got a Mickey Mouse, a Pluto car and a Donald car. Pooh got an Iron Man flashlight. Duke, Bubbles, and Jem all got the container of Legos. Pippi got an Elsa barbie doll. I got an Ariel shirt.

After an hour or so of shopping it was time for lunch. This really is the only reason I wanted to go to Downtown Disney. T-Rex. That’s right T-Rex restaurant was where I had chosen to eat lunch that day. The kids loved the outside of the restaurant and loved inside more once we were seated. On one side we could see all the different types of dinosaurs while on the other side there were fish tanks.The kids each received a T-Rex hat to wear. To be honest I don’t remember what anyone ate. I had chicken and George had ribs, I think. It was good nonetheless. Every few minutes or so the dinosaurs would freak out in fear of the meteor shower. It was a wonderful experience. One of my favorite experiences of our Disney World trip.

After lunch we decided to head over to Hollywood Studios. We had a few things planned but weren’t sure what the rest of the day would be like. The first ride the older four and George rode on courtesy of Fastpass was the Start Wars ride- Star Tours: The Adventures Continue. I took the younger two boys to the Honey I Shrunk the Kids Movie Set. The boys had fun running around, getting sprayed with water and sliding down a slide or two. They didn’t like all the dark, cramped tunnels. In fact getting lost in those dark, cramped tunnels leaves you at the mercy of a strange little boy who offers to lead you out. The boys had fun. I hated it. If we had taken all six to this spot, one would have gotten lost and started crying for sure. I say this because all of the props and features are huge and there are lots of places to wonder off and hide.

After somehow keeping track of the two boys we met back up with George and the older four. It was just after lunch and we were already dripping sweat. After the kids kind of played in the Muppets fountain we went in to see Muppet Vision 3D. Kermit and Gonzo are absolutely my favorite Muppets. My kiddos have seen enough of the Muppets to share my love but they did enjoy the show. I thought it was pretty well done.

Hollywood Studios feels like a lot more walking but I think that’s because theres more shops ,space, etc. between the rides. We made what seemed like a mile long walk over to Walt Disney: One Man’s Dream. It’s a small gallery with a short film to watch about Walt Disney. I think even the older kids enjoyed learning a little about the man who created Mickey Mouse and Disney World. Walt Disney really was an amazing man.

Right next door is the Voyage of the Little Mermaid. We used our Fast Pass to make sure we got in pending the alternative of a long wait. So this is live action bits and pieces of the movie with special effects. Lots of smoke and lights. The singing was pretty good but it seemed to go so quickly through the movie. Jem really is a huge Little Mermaid fan but I think even the little boys enjoyed the show.

The last thing we were able to enjoy before buckets of rain started to fall was the Toy Story Midway Mania. It’s the same as Buzz Lightyears’ Space Ranger Spin at Magic Kingdom. It was just a ride I thought the boys would enjoy after watching The Little Mermaid.

Since it decided to started to rain buckets we were not able to see the Indiana Jones show or any other shows. The walk to the car told me right away that it was going to rain for a while. We were all drenched by time we got to the car. We headed back to the hotel in hopes of staying dry and getting some laundry done.

Once we were back at the hotel we changed out of our wet clothes and ordered a pizza from the hotel cafe. It was pretty good pizza. I prefer my homemade so this was a close 2nd or 3rd I would have to say. Then I took my time gathering all the laundry from around the couple rooms we had been occupying the past of days. 8 pairs of clothes per 4 days plus pjs adds up pretty fast.

Pippi and I hung out watching videos on Youtube waiting for the laundry to be done. As we got closer to being done I had the husband finish up while I worked on gathering all the other various belongings into a bag or box to be put into the car. I like to have things done ahead of time in hopes of getting to enjoy a few moments of nothing.

After finishing up I took Pippi over to the arcade as a reward for helping. We played several games together before deciding to it was time for bed.  It had been another long day and I was excited for the next couple of days.

As we drove away the next day I’m sure I sighed several times in relief that we had fun, saw the cousins and had survived 4 days of Disney World. It was an experience I hope the kiddos appreciate and never forget. 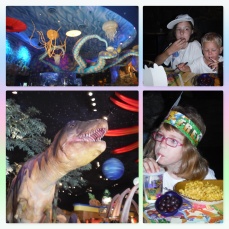 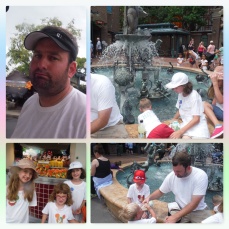 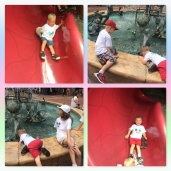 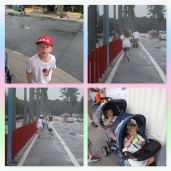 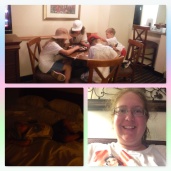