Our Sunday plans consisted of Mass, lunch, and a surprise field trip. Sundays seem the quietest day of the week here. It makes it easier to get out and enjoy our adventures more. This Sunday proved to be a really good family day. *mild spoilers below*

Summer is he best time to church hop. So we decided to take advantage of the opportunity and try out Mass somewhere different. We decided to try out St. Columba Catholic Church. George has been before and thought it was a beautiful church. Why does it matter what the inside of the church looks like? Well, kids like to look around and explore things. When we take them to a new church they are more likely to sit and look at everything. They love finding Mary and Jesus and looking at beautiful colorful stained glass. How can they pay attention to Mass? They don’t need their ears to look at things. I learned a long time ago that kids listen to everything. Even when you don’t want them to or when you think they aren’t,they are listening. It’s good for them to exercise their senses. Anyways, it was a beautiful Mass. I look forward to church hopping some more this summer.
We weren’t sure where to eat lunch. After driving around a little bit we ended up at TGI Fridays. The kids like Chili’s so we knew they would find something they liked on the menu. We had chips and salsa as well as mozzarella sticks for appetizers. Pooh and Baby Kermit are in the phase were they always want pizza when we go out to eat. I thought mozzarella sticks were the next best thing. They seemed to enjoy them. The kids all did a good job eating. Good Eaters as George calls them. I will say we had a very nice waitress. Then manager was nice as well. It really does make the difference when it comes to eating out with the kiddos.

Alright onto the review. So the very obvious part is them looking for Dory. She starts to get flashbacks of her life before meeting Marlin. Dory was separated from her parents and somehow with short term memory survived in the ocean to help find Nemo. There are some new characters like Hank the octopus and Destiny the whale as well as many others including cuddling otters. I didn’t find this movie too far a stretch from Finding Nemo. It was very Pixar. I was pretty entertained by the whole octopus carrying a fish in a coffee pot. The movie gets a little slow near the end but it quickly made funny by an octopus driving a truck. Overall it was a good movie. I think you’d get at least 4 big thumbs up from my bunch. Make sure to read their thoughts below.

From the mouths of Babes:

Bubbles said, “I liked when Dory remembered when she was a baby and when she found her family. Then I like when the little animals hugged each other, that was cute.”

Jem said, ” It was weird. I especially like the part where the 2 seals were sitting on the Rock and some weirder seal came and scared them away. Cause he’s weird. It was so weird that Dory has a whale friend. Why would Dory have a whale friend?”

Pippi said, ” It’s except able. I expect more from Disney. I think they should have added more. Like I don’t know more action. I think it got kind of boring at the end because at one point Dory was gonna find her parents. There’s no doubt about it. ”

Duke said,” Good. It was nice  because I didn’t like there was a squid thing. The squid thing was really mean. It was trying to eat Nemo and the octopus thing eats fish. And I liked Dory when it was small. So the movie was good. I liked it.”

Pooh, ” I watched Finding Dory. I just watched it and ate popcorn. I liked the octopus. It was funny. He say bet beer were wee I’m driving a truck.” 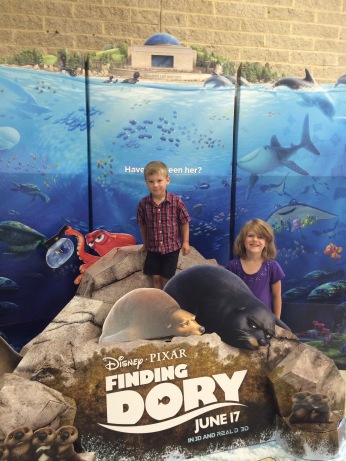