I decided one day to give Crystal, My best friend’s wife a call. We normally speak on a regular basis but time had gotten the better of us both. It was a good thing I called because she began talks of us get out families together between DC and Alabama. My first thought was let’s enjoy the beach again but after alot of research I realized that was too expensive and it’s was way too hard to find a good hotel room for a family of our size. We had talked months ago about Charlotte, NC and I decided that would work. I had already done the research and finding a nice hotel was easy. I was very excited to have planned a trip months before that we were going to be able to take. The best part of the plan and trip was that Kevin, my best friend had no clue what we were up to.

The drive down wasn’t too bad. We only stopped a few times. We ate dinner at Horne’s in Port Royal, VA. You can check out George’s review of our experience here. After filling our bellies we were back on the road. It wasn’t long before we made the decision to stop for the night. The weather was very stormy and the roads were really wet. We ended up staying 2 1/2 hours from Charlotte. The next day we finished our drive to Charlotte. I was really glad that our surprise had not been spoiled. We made plans to meet up after lunch.

We ate our lunch quick as we were all really excited to meet our friends soon. We decided to meet at the Billy Graham Library. I honestly wasn’t sure what it was but thought you can’t beat free. And yes I know who Billy Graham is. I was Baptist before I became a Catholic. Anyways we decided to explore a little before Kevin and his family arrived. The kids loved running around the woods. Although I’m not sure you are really allowed to do that. Whoops. We went into the Graham Family Homeplace where an old family friend was greeting visitors. We stopped and chatted with her for a few minutes. She was very sweet and made sure to give each person in the family a Bible verse.The kids weren’t that interested in looking at what’s inside a house. Then Crystal let me know that they had arrived and were in the Barn.

The Barn is the main building on the grounds. We walked in and I started to scan the room for Kevin. For identified Crystal and the kiddos before acquiring the target. George was at the front desk getting information about the museum so who would think something of a single person walking over to you. Kevin was just standing there listening to the intro to the tour and I walked up to him and say “Hey, Whatcha doing?” He was very surprised and hugged me and didn’t want to let go. He said “You can’t go anywhere!” It really was the best surprise. He was speechless otherwise. Not long after the kids realized who I was talking and came over to say hi to all the kiddos. George finished getting the normal welcome and we were moved along to the next part of the tour.

The kids quickly and easily melded with a buddy. It’s a good feeling that my best friends kiddos get along so well with mine. We were slowed pushed along the tour of Billy Graham’s life. The kids had a fun scavenger hunt to complete along the way. While I think I only picked up a few things I was so happy that after a year I was getting to see my best friend again. Kevin has been there through so much with me. He was the reason I survived the Dark Days of High School. He is the weirdo in the room and I am very happy to be right next to him. Anyways, The Billy Graham Library has alot of great exhibits and videos about his life.It was fun to see that some of his favorite Bible verses are well loved by everyone.  He really has been an important influence on the Christian community for many years. My kiddos asked if he was a saint. Aside from the fact that Billy Graham is still alive and kicking, George tried to explain that the Catholic takes into account saints differently the other denominations but we both agree that he is definitely worthy of the title.

The kids finished up their scavenger hunt and headed to the gift shop for their prize. They each received an ABC’s of the Gospel with a bracelet. It was a nice surprise. I picked up my normal batch of postcards to send to the nieces and nephews. Then we headed over the the Dairy bar. My husband has a love for ice cream that even I can’t quite understand. That means that any chance for ice cream he always says “YES!” So ice cream or milkshakes it was. The kids made the usual mess but I was ok with that as we were heading to the hotel to check in next.

At the hotel we had a blast playing in the pool with our friends. The kids loved hanging on Kevin while he wondered around the pool. The girls found him very amusing. The boys were just happy to be able to play with their fish in the pool. They would pick an adult and hold on for the ride. Again it was fun to see the kids play together. I was also very excited to see what we could get into the next day. 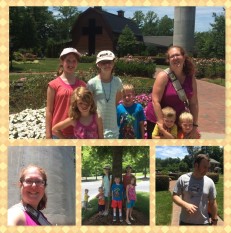 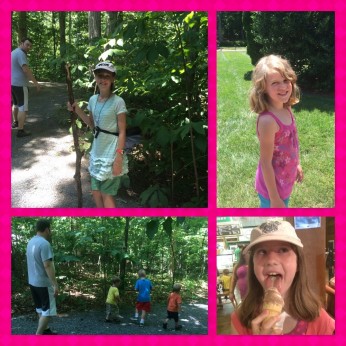